Regulate, Reason, Reassure, or “RRR” is a coping skills class for parents, (kids, teens, young adults), adults, or clinicians who are looking for a way to manage and understand misophonia. RRR combined psychoeducation, cognitive therapies, and a sensory self-regulation approach. RRR has three manuals: one for parents, one for adults, and one for clinicians. Together with these manuals, RRR forms a coping skills class for all ages.

Who came up with RRR?

Dr. Jennifer Jo Brout, a psych doctor in the United States came up with RRR as a response to her child, and her own misophonia. Dr. Brout has worked tirelessly on sensory-overresponsivity and auditory over-responsivity (which later became coined as misophonia) for two decades. Dr. Brout formed the SenNetwork in the mid 2000s, and went on to found the Duke Sensory Processing and Emotion Regulation Program in 2007, which went on to become the present day Duke Center for Misophonia and Emotion Regulation (CMER). Presently, Dr, Brout runs the International Misophonia Research Network (IMRN), and is co-director of Misophonia Education.

How do I take a Coping Skills (RRR) class?

Coping Skills classes are held online via Zoom. Registrations are done through our website, www.misophoniaeducation.com, and each class has its own registration. Clinicians and teachers classes are on-demand, where classes for parents, adults, teens, and young adults are live over the course of two nights.

Links to each class type

Do you have testimonials I can read?

Yes, we have testimonials that you can read on the following link: https://misophoniaeducation.com/testimonials/

Here is one testimonial:

“Great workshop. I would recommend to anyone who suffers from Misophonia or is a loved one of someone who does. Dr. Brout did a great job explaining the science behind the mind and body’s misophonic reactions and offered a plethora of concrete actionable coping strategies for proactively preparing for possible trigger situations, responding in the middle of triggering situations, and getting back to “normal” after a trigger. It was also great being able to bounce questions and thoughts off Dr. Brout and other class participants.” – Kyle

We don’t know the underlying causes of Misophonia, although there are numerous areas of speculation. There may be many causes for sound sensitivity or auditory over sensitivity.

Misophonia does not appear to be “psychological” in nature (i.e. arising in the mind) versus physiological (i.e. having to do with the body and its systems).

The lines previously drawn between “neurological” and “psychological” are very much blurred today, as are audiology and neurology. It appears to involve the neurological and auditory systems and has psychological consequence.

Is it Genetic or Learned?

The distinction “nature versus nurture” (“genetic versus learned”) is not as clear as was previously thought. “Gene regulation” means that a gene (or genes) can be turned on or off based upon an individual’s interaction with the environment. Also, disorders such as misophonia may caused by the interaction of multiple genes, rather than being attributed to one gene.

This means that two people could have the gene(s) for misophonia and depending upon life experiences, one individual may manifest symptoms of the disorder and one may not. This also means that the age of onset of the disorder can vary depending on environmental circumstances. Therefore, this is a highly complex area that is certainly relevant and that we want to research, but it may not offer a quick and/or direct path to treatment (which is counter to what many of us have previously learned).

Although “chewing” and other “people-emanated noises”, such as coughing, sneezing, throat-clearing, etc. are very common triggers for people with Misophonia, other noises, (as well as visuals) have been noted as triggers in the early research.

The Jastreboffs (2001) originally noted that Misophonia sufferers aversively react to pattern-based sounds, some that are person-oriented (e.g. chewing, coughing, sneezing, etc.) many that are not (e.g. pencil tapping, basketball bouncing, typing on a keyboard, etc.).

This in fact, is how the Jastreboff’s distinguished Hyperacusis from Misophonia.

People with hyperacusis react to loud sounds, whereas those with misophonia react to “soft”, “pattern-based” “repetitive-based sounds” (2001).

This is a very complicated question since many processes interact within the nervous system (and sensory systems) ! The idea that a “trigger sound” may be attached to a specific person is confusing.This is an area that we hope to parse out through research, and that may prove to help with coping skills

What about Visuals and other Stimuli?

Many people with Misophonia also report aversive responsivity to visual stimuli. It is not yet clear within the research if this relates to movement, repetitive movement and/or other visual stimuli. It is not clear, as well, how many people with Misophonia have sensitivity to movement and/or other visual stimuli and if physiological and behavioral reactivity is the same. A subtype of Sensory Processing Disorder (Sensory Over-Responsivity) describes children who experience the fight/flight response as a result of auditory, visual, and other stimuli. Hopefully research will refine these subtypes in order to inform treatment.

How Can a Parent Figure Out if their...

Misophonia, Misokinesia, and the Brain

As a Psychiatrist or Psychologist How Can I...

What are Misophonia Triggers?

How Do I Get a Misophonia Diagnosis?

Misophonia is not just a chewing disorder!

How To Explain Misophonia 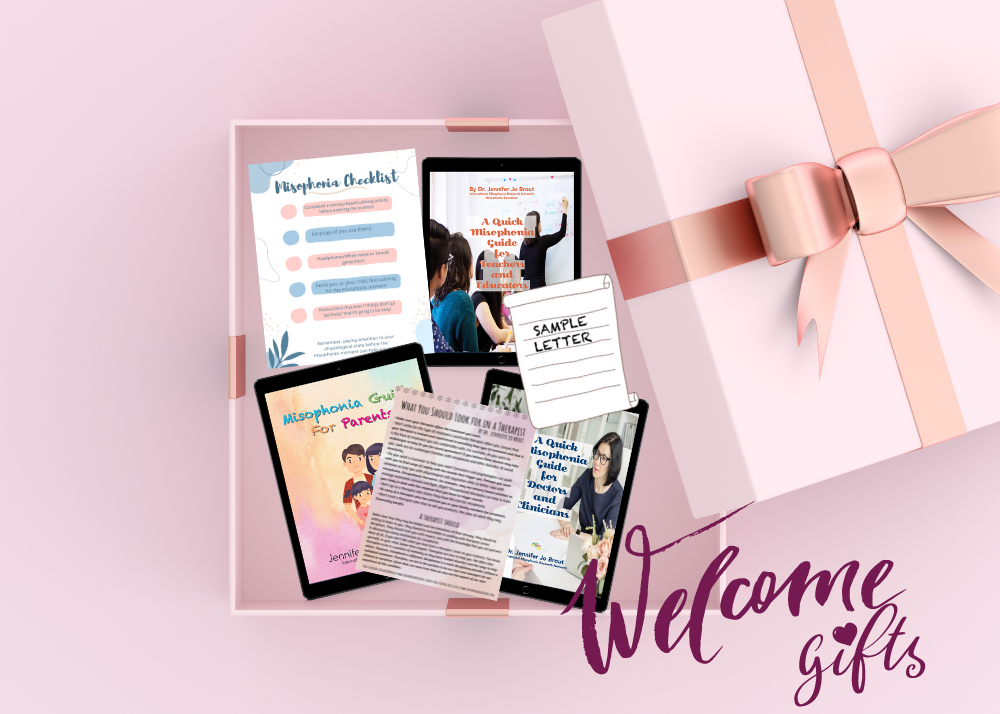 You will receive an email from us shortly.

A note from Dr. Jennifer Jo Brout about class prices

This website uses cookies to improve your experience. We'll assume you're ok with this, but you can opt-out if you wish. Accept Read More